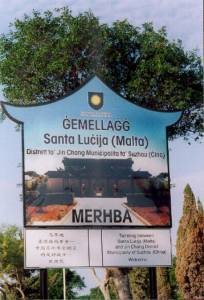 Jin Chang District is located at the Northwest of Suzhou municipality, it borders on city proper in the east. Hi-tech Development District in the west and is a scenic tourist district as well as a commercial center. The jurisdiction area of it covers seven residential districts a

Jin Chang District has been the downtown center since the ancient times, especially during the Ming and Qing Dynasties (1944AD – 1911AD) it was the major commercial center and key collecting and distributing center in south of Yangse River. A Chinese painting named “Painting of Peace & Prosperity” by X Yang of Qing Dynasty depicted the thriving and prosperous of Chang Men (Jin Chang District) in Qian Long reign of Qing Dynasty. In his masterpiece of “Red Chamber Dream”, Cao xueqin described Chang Men as “The most attracted place for riches and romantic affair in human society”.

Town Twinning with Guzu District of Suzhou Municipality of China

In the year 2012 the former Districts of Jinchang, Canglang, Pingjiang were merged into a larger district named Gusu District. It covers an area of 85.1 square kilometres with a population of 950,000.

The Council of Santa Lucija accepted this renewal proposal and agreed to enter into a new town twinning agreement with Gusu District. Both parties agreed to deepen the co-operation between them and exploit all possible opportunities to pave the way for more prosperity and harmony between the community of Santa Luċija and that of Gusu District.